I’ve backed a few Kickstarter projects, but haven’t received anything tangible from them, until now. My pen from The Pen Project arrived this week. It’s an aluminum case around the (apparently well-regarded by Pen People) Fisher Space Pen ink cartridge, made by guys turning a lathe in Massachussets, and it’s pretty cool. The cap unscrews cleanly and attaches precisely – very precisely – to the end of the pen, making it a full-length instrument. It’s nicely heavy, a weight I’m not used to in the rollerballs and gels I normally write with, which takes a small bit of getting used to. With the cap on, the whole thing is a compact five-sixths of the length of my iPhone 4S – just right for tossing in my pocket with my keys to take everywhere. 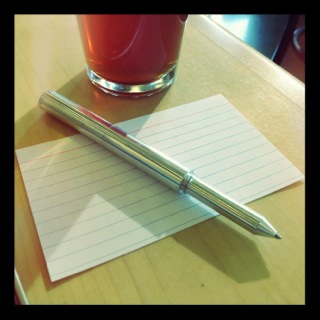 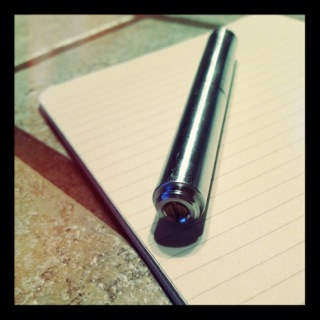 After a few days of carrying it shopping, to work meetings, and around town, it has a few nice scrapes on the barrel to break up those clean machining lines. The pen’s designer, Ian Schon, says that the aluminum will wear to a patina over time, becoming individual to each user’s hand, which I think is quite cool for an instrument that is so often disposable.

I was thinking of this a little when I came across Shawn Blanc’s thoughts on The iPhone is Here to Work. He reflects on the beauty and utility of his iPhone 5 after its acquisition of the first scrape into that sleek anodized back.

After snapping a few photos of our sleeping boy, I turn the phone around so Anna can see the screen and browse the images I’ve just captured. I think to myself how it’s unfortunate my iPhone is no longer mint. And yet I wouldn’t trade that scrape for a case or a cover, and certainly not for a lesser device where scratches seem less intrusive.

After the iPhone 5 announcement I took my own phone out of its little gray Speck case for the first time in a while. Sure it’s taken a few more scrapes on that shiny back glass, and it’s a little more slippery when I set it on the arm of the sofa (which leads to a few more scrapes). It was always a fine little smart tool, and although it never looked bad in the case, it’s made to be carried and used just as it comes, just like the pen, not because it’s fancy and should be shown off to other people, but so the user appreciates the precision and craft and thought that shaped it.

But I’m still not going to toss it in the same pocket with that pen. I’m not crazy.