With a MacBook Pro upgrade, mentions hacking, and sync updates, it’s been a sort of Infrastructure Summer around here.1 To cap it off, after getting the new MBP up and running I decided to get serious about my home storage and backup.

I have frequently heard good things about Synology, so I started there. One of my goals was to centralize storage from a rolling series of external USB drives that I have accumulated over time. These drives have occasionally been connected to an Airport Extreme, hosted via an old iMac, or just plugged in from time to time to offload photos, music or video into “offline” storage, where it’s no longer taking up space on my laptop.

While I sort of drool over the fancy multi-bay devices like the DS1513+, my needs just aren’t that heavy. So Shawn Blanc’s Brief Review of the Synology DS213j — Shawn Blanc made that particular device look just about right. His writeup is the one I pinned for later reference and leaned heavily on for first principles when getting up and running with my very own DS213j. I also learned a lot from Gabe Weatherhead’s post about moving from a Drobo to a Synology. (I don’t know what I would do with Gabe’s 24-port switch save for gaze at the magnificent 18 unused ports, but I picked up an 8-port switch with my DS and dramatically improved the wiring in my cabinet as well as getting a spare hard-line to my laptop for when I’m at the desk.) 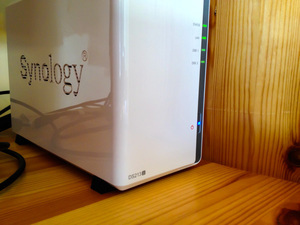 Like Shawn, I plugged two 3TB WD Red drives into the box. On setup, the Synology gives the option of automatically configuring the second drive as a mirror of the first; great, one less thing for me to figure out. So that leaves me with 3TB on board space, plus a USB drive plugged in as an additional redundant backup.

Obligatory Old-Days Aside: My first hard drive was a 20 megabyte disk installed in a Compaq DeskPro 386s. I later convinced my dad that we needed to replace it with a 40 meg drive so that I would have room for Wing Commander and my WWIV BBS. Sometimes the very idea of gigabytes of storage, to say nothing of three terabytes of disk space, still sort of blows my mind.

So what am I doing with all this?

I greatly underestimated the satisfaction of having seamless access to my previously-archived photos. For years I moved from six months to a year of Lightroom library to an external hard drive. This freed up precious storage space on two generations of laptops but meant that I couldn’t get to those images without finding and plugging in that drive. Moreover, with each offloading cycle I had to re-identify the folders I had previously moved over and check backup status before I could even start moving the current set. It was a lot of mental overhead and consequently was all too easy to put off.

Now, with the NAS, I simply scroll further back into the years within my Lightroom library, and there are my photos. I am rediscovering photos and memories that I haven’t thought about in years. In photographic terms it’s inspiring: There are some pictures there that I’m proud of, work that I really like. In emotional terms, it’s wonderful: The summer we hiked every day; the trip to Orcas; odds and ends of days.

Shawn and Gabe both discuss the DiskStation software on the Synology, so I won’t go much into it except to say that I really like it. Being basically a UNIX-based NAS, this is a sophisticated piece of hardware and has a lot of capability. Synology overlays an accessible interface on top of the linux guts of the device, making volume creation and management, user administration, and application installation really slick.

Since it’s linux you can do all kinds of stuff, like ssh into the box, copy over an rsync script, and use the box as a server to perform scheduled backups to and/or from remote server. Zarino Zappia has a series of great posts that detail accessing the Synology via ssh and moving files around through the terminal.

I would likely look for a device with more USB ports next time. I’ve already swapped the printer with another USB drive a couple of times. It would be much more convenient to have a spare cable that I could easily attach another drive to temporarily.

At some point I’ll explore the features I get by opening up the NAS to external access, like music sharing to my mobile devices, as well as general file sharing. I have some of those remote server jobs to schedule, and I’m interested in trying out the Photo Station app. Meanwhile, there’s not much downside to this solution for me, and at this point it’s pretty much a fully operational battlestation. I got storage, backup, new capabilities from the Tiny Server in the Synology, and even got my cabinet cleaned up as part of my installation. I’m happy.